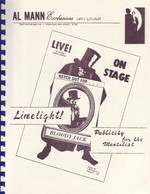 Marco's Comments:
Booklet on the power of advertising (in newspapers) for mentalists. The main part is a long talk about how to advertise and the benefits it may bring. The second part is a clever headline prediction, from which Binarelli created his version. An idea there (to use a page from an old newspaper inside the current newspaper) is very good and would avoid the force of a card or something else. Bought in a lot from Lybrary.com with many of the Al Mann booklets. It came unbound as Chris Wasshuber bought the remainders of the Al Mann's books and has been selling them for years. I spiral-bound it myself (with the A4 binder).