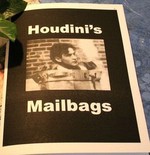 Marco's Comments:
Interesting booklet examining the mailbags Houdini used to escape from, four of them total (one from one of Houdini's drawings, two from photos and one of the Radner's auction) with an historical study on mailbags. Basically, it seems Houdini had the mailbags made to his specifications and was picking them rather than using the modern bar used for this evasion. The booklet is interesting, but it could have been an article in a magic magazine.